Celebrate! The Music of Civil Rights

Speaker Program 1: Sunday, January 24, 2021, 5:30-6:30 pm Eastern
Musicians: Crys Matthews, Melanie DeMore, and Sparky and Rhonda Rucker
The first program, which will lead off both our Speaker and Music series, features Crys Matthews, one of the brightest stars of the new generation of social justice music makers, Melanie DeMore, vocal activist and preservationist of the African American Folk Tradition, and Sparky and Rhonda Rucker, civil rights activists and folk singers. These amazing artists will share music of the Civil Rights Movement, then and now, and provide context and understanding of the role music played and continues to play in justice movements. Come sing along!

​If you missed it, you cn watch it here!

​ Washington, DC resident, Crys Matthews is among the brightest stars of the new generation of social justice music-makers — an award-winning, prolific lyricist and composer, blending Americana, folk, blues, bluegrass, and funk into a bold, complex performance steeped in traditional melodies punctuated by honest, original lyrics. She is made for these times. Of Matthews, ASCAP VP & Creative Director Eric Philbrook says, “By wrapping honest emotions around her socially conscious messages and dynamically delivering them with a warm heart and a strong voice, she lifts our spirits just when we need it most in these troubled times.” Justin Hiltner of Bluegrass Situation adds, her gift is a "reminder of what beauty can occur when we bridge those divides."

Matthews was introduced to the national stage in 2013 through strong performances in song contests and wide radio play. She cemented her acclaim at Lincoln Center as the 2017 NewSong Music and Performance Competition grand prize winner and winner of the People’s Music Network’s Social Justice Songs contest at the 2017 Northeast Regional Folk Alliance. That year she also released two new collections — her album called The Imagineers of thoughtful songs on love and life, and her EP called Battle Hymn for an Army of Lovers which tackles social justice themes.

Crys Matthews's thoughtful, realistic and emotional songs speak to the voice of today’s generation and remind us why music indeed soothes the soul. 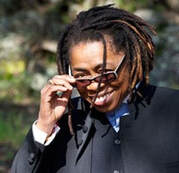 Melanie DeMore: Vocal Activist is a singer/songwriter, composer, conductor, and vocal activist, who believes in the power of voices raised together. She is one of the most outstanding vocal artists of today helping to preserve the African American Folk Tradition through song and Gullah stick pounding. She was the subject of Stick and Pound, a documentary which showcases this tradition. Melanie has a career spanning 30 years dedicated to teaching, lecturing, mentoring, conducting, directing, and inspiring children and adults about the power of song as social and political change.

Melanie is sought after as a song/ prayer facilitator, creating spontaneous choirs for The Trinity Institute, The Haas Institute for a Fair and Inclusive Society, and the Powell Foundation, as well as many varied spiritual and faith based organizations. She is adjunct faculty at the California Institute for Integral Studies, lead teaching artist for Cal Performances at UC Berkeley, a featured presenter for Speak Out!, the Institute for Social and Cultural Change, and the Artistic Conductor of The Oakland Children’s Community Choir with Living Jazz.

She was a founding member of the Grammy nominated, Linda Tillery and the Cultural Heritage Choir, and has had the pleasure of sharing the stage with such varied artists as Odetta, Richey Havens, Pete Seeger, the Trinity Choir, MUSE Cincinnati Women's Chorus, and many others.

Melanie says, “A song can hold you up when there seems to be no ground beneath you.”

Civil rights activists Sparky and Rhonda Rucker have performed at the Kennedy Center and the Smithsonian Folklife Festival as well as NPR's On Point, Prairie Home Companion, Mountain Stage, and Morning Edition. Their recording, Treasures & Tears, was nominated for a W.C. Handy Award, and their music is also included on the Grammy-nominated anthology, Singing Through the Hard Times.

Sparky has been involved with the Civil Rights Movement since the 1950s. He participated in workshops at the Highlander Center with many prominent people in the movement, such as Rosa Parks, Myles Horton, and Bernice Johnson Reagon. During the 1960s, he served as Vice President of the Black Student Union at the University of Tennessee. As an activist, he worked with the Poor People's Campaign and several civil rights organizations, including SNCC, SCLC, and SSOC. He marched shoulder-to-shoulder with SNCC Freedom Singers Matthew and Marshall Jones and played freedom songs at rallies, marches, and sit-ins alongside other folksingers such as Guy Carawan and Pete Seeger. His support for others knew no color boundaries. He worked to win recognition and benefits for white Southern Appalachian coal miners as a staff member of the Council of the Southern Mountains in the 1970s.

Together with Sparky, Rhonda has led and participated in workshops at the Highlander Research and Education Center, which was instrumental in energizing and organizing people during the Civil Rights Movement, and at Common Ground on the Hill in Maryland for more than 20 years. Both accomplished storytellers, Sparky and Rhonda travel the country performing songs and stories in many school classrooms and workshop programs.

Rhonda has also brought the issues and events of the fight for Civil Rights to young people (and those not so young!) through her writing. Rhonda’s Civil War-era novel, Swing Low, Sweet Harriet, was a Crystal Kite Award finalist. Her more recent books, Make a Change (based on Sparky’s childhood) and Welcome to Bombingham, based on the bombings and the Children’s March in Birmingham, AL, take place during the Civil Rights Movement.
DONATE
All programs are free. Donations will be accepted to support the phenomenal guest speakers/musicians participating in the series and the ongoing work of the Living Legacy Project.