Sankofa: The Musical Legacy of Protest

We're sorry that Josh White, Jr. will not be able to join us as planned, but thrilled that Pat Humphries & Sandy from Emma's Revolution have agreed to join us in his place. ​ 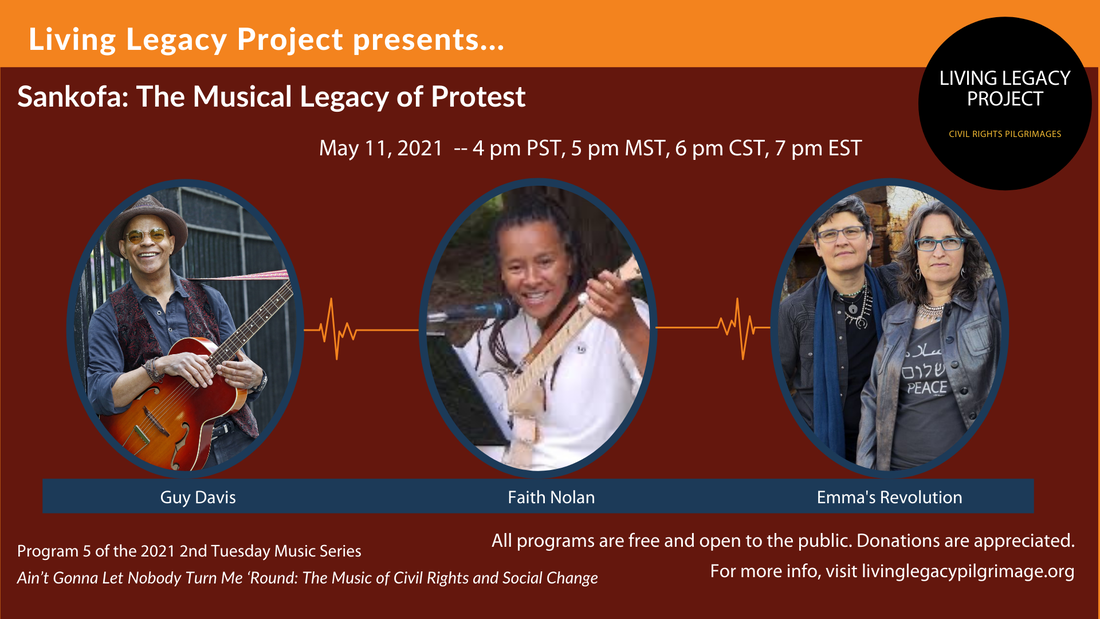 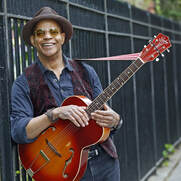 When Guy Davis got a Grammy nomination for his last album -- Sonny & Brownie’s Last Train, an homage to blues legends Sonny Terry & Brownie McGhee -- he characteristically took it all in stride.

As it turned out, they both lost to an upstart combo called the Rolling Stones. And Guy Davis went back to work. Never an artist who fit any narrow definitions of the blues, Davis regularly finds new outlets for his warm singing and deft acoustic playing. Both are evident on his new album, Be Ready When I Call You. But this time it’s his songwriting that really comes forward. For the first time in over a dozen-album career he wrote nearly everything on the disc, Howlin’ Wolf’s classic “Spoonful” being the sole exception. At the same time, he’s broadened his musical reach to include everything from modern electric blues to banjo shuffles, even a touch of rap on one number.
His parallel careers -- as an author, a teacher, and a Broadway and film and television actor—mark Guy Davis as a Renaissance man, yet the blues remain his first and greatest love. Growing up in a family of artists (his parents were Ruby Dee and Ossie Davis), he fell under the spell of Blind Willie McTell and Fats Waller at an early age. Guy’s one-man play, The Adventures of Fishy Waters: In Bed With the Blues, premiered off-Broadway in the ‘90s and has since been released as a double CD.  He went on to star off-Broadway as the legendary Robert Johnson in Robert Johnson: Trick The Devil, winning the Blues Foundation's Keeping the Blues Alive award. More recently he joined the Broadway production of Finian's Rainbow, playing the part originally done in 1947 by Sonny Terry—an experience that helped inspire the acclaimed Terry/McGhee album.

Though he’s stayed busy writing and recording during the pandemic, he looks forward to playing live as soon as circumstances allow. “I love doing what I do and I’m aching to get back out there. Don’t get me wrong, the computer screen is OK. But I want to get back in front of people.” 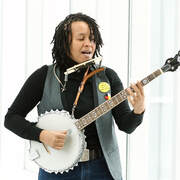 Faith Nolan is an artist who is also a community builder, she is presently the director/founder  of Vanier Music therapy Program. She was founder of the women's music therapy program at CECC and CNCC from 2008 til 2014. In 2006 thru 2009 she founded, directed, and recorded 2 CD's with  the Elementary Teachers of Toronto  She has founded three other Toronto based choirs, Sistering Singers, Mandela Children¹s Choir, Voices of Freedom. In the late eighties she founded and directed Kingston Women Prisoners Choir. In 2004 Faith was on the Board of Mayworks, Toronto. She created Joint Effort in 1991. She was a founding member of the Black women¹s Collective 1984 and Our Lives Newspaper 1986, Sisters Café 1991, MWIC in 1983-present, WRPM record distribution in 1995, Camp SIS 1995- present. She was on the Board with Charlie King, Pete Seeger in 1987 of the PMN. She is a composer and guitarist whose style varies from blues and folk, to jazz, with a taste of funk and reggae, is a seasoned performer who has built a strong and faithful audience.

Faith's original compositions, as well as her covers of better known songs, are strongly rooted in the cultural language of Black North American music: spirituals, gospel, jazz and blues. An accomplished musician who plays slide guitar, tambourine, harmonica, and banjo in the earliest blues tradition, Faith also possesses a silky voice that wraps itself around a song. Her lyrics voice a concern for the world of the common people. Music may well be in her blood as her mother was a drummer, her late father was a musician and her sister played in a band. An Afro-Nova Scotian Miq Maq, Irish activist whose songs deal with a range of issue including Afro Canadian History and native heritage, feminism, workers' issue and children's rights, Faith is one of those rare artists who can grab a song and make the message ring out true and clear. Enhancing her musical is the creative allowances that come from being self-taught.

Faith Nolan's songs come from a deep commitment to the struggles or people throughout the world. According to Faith, "Music is a powerful tool that can be used for political and cultural expression." It is in a global context that Nolan used this tool to connect the conditions and exploitation of oppressed peoples, in songs such as "The Richest In The World". Hard to Imagine lyrically tells the story of poverty, racism, violence against women, and the need to struggle for better world to live in. 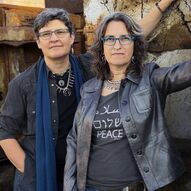 Known for fearless, truth-telling lyrics and melodies you can’t resist singing, Emma's Revolution is the dynamic, award-winning activist duo of Pat Humphries & Sandy O. The duo’s songs have been sung for the Dalai Lama, praised by Pete Seeger and covered by Holly Near. Their recent release, “Our House is on Fire”, was been selected as the opening track for Hope Rises, a compilation CD from a national nonprofit co-founded by Noel (Paul) Stookey of Peter, Paul & Mary. Their upcoming track about the Insurrection, “On a Day in January”, will be released April 1st.
Emma’s Revolution are winners of the John Lennon Songwriting Contest Grand Prize and the  first Phil Ochs Award, among other honors.
"Our work has always been about building connection, love and justice through song,” the duo says. "During this pandemic, we have moved as much of our work online as possible, creating opportunities for people to sing together (Zoom-style, of course), use songwriting as a way to process emotions in an unsettled era, and attend concerts where they can have a sense of connectedness, solace and joy, even in this challenging time.”
DONATE
All programs are free. Donations will be accepted to support the phenomenal guest speakers/musicians participating in the series and the ongoing work of the Living Legacy Project.