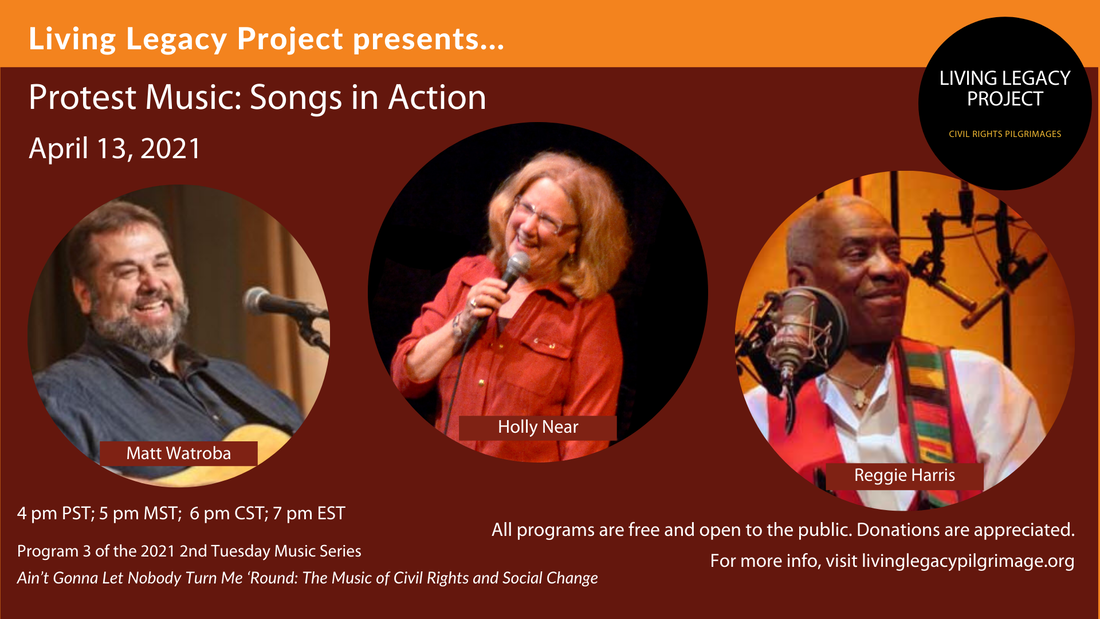 In this liminal time, as we balance between the way things used to be pre-pandemic (“normal”) and the way things will be (“the new normal”), join three of today’s most stirring and perceptive singers/songwriters/storytellers, Holly Near, Matt Watroba, and Reggie Harris, as they share music and insight in “Protest Music: Songs in Action,” another program in Living Legacy Project’s series Ain’t Gonna Let Nobody Turn Me ‘Round: The Music of Civil Rights and Social Change. This three-way conversation/musical sharing is sure to motivate, inspire, and challenge us all to work toward a post-pandemic world filled with justice, peace, and compassion.

After the formal program, you're invited to join us for an informal discussion and question and answer session with Holly, Reggie, and Matt. 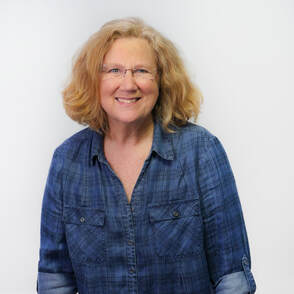 Holly Near - Photo by Irene Young
Holly Near has been singing for a more equitable world for well over 50 creative years. She is an insightful storyteller through her music, committed to keeping the work rooted in contemporary activism.

Respected around the world for her music and activism, Holly released her 31st album in 2018.

One of the most powerful, consistent, and outspoken singers of our time, her concerts elevate spirits and inspire activism. A skilled performer, Holly is an outspoken ambassador for peace who brings to the stage a unique integration of world consciousness, spiritual discovery, and theatricality.

Holly’s joy and passion continue to inspire people to join in her celebration of the human spirit. Equally compelling at her shows and through recordings, Holly’s music fully engages listeners in the world around them—speaking to anyone who believes in peace, justice, and feminism; a wonderful spectrum of humanity.

​Born in Ukiah, CA in 1949, Holly began singing in high school, including work with a local folk group. She built on her performing career with acting parts on seminal ‘70s television shows like Mod Squad, Room 222, and The Partridge Family. In 1970 she was a cast member of the Broadway musical Hair. Following the Kent State University shootings in May of that same year the entire cast staged a silent vigil in protest. The song, “It Could’ve Been Me” (which was released on A Live Album, 1974) was Holly’s heartfelt response to the shootings. In 1971, she joined the “Free The Army” tour, an anti-Vietnam War road show of music, comedy, and plays organized by antiwar activist Fred Gardner and actors Jane Fonda and Donald Sutherland.

In 1972, Holly was one of the first women to create an independent record company, paving the way for women like Ani DiFranco and others. Her goal was to promote and produce music by politically conscious artists from around the world, a mission that Redwood Records fulfilled for nearly 20 years. Often cited as one of the founders of the Women’s Music movement, Holly not only led the way for outspoken women in the music world, but also worked for peace and multicultural consciousness. Throughout her long career Holly has worked with a wide array of musicians including Pete Seeger, Ronnie Gilbert, Arlo Guthrie, Mercedes Sosa, Bernice Johnson Reason, Bonnie Raitt, Jackson Browne, Joan Baez, Phil Ochs, Harry Belafonte, and many others.

Holly Near has been recognized many times for her work for social change, including honors from the ACLU, the National Lawyers Guild, the National Organization for Women, and the National Academy of Recording arts and Sciences. Holly was also named Ms. Magazine Woman of the Year and received the Legends of Women’s Music Award. During her travels in the Pacific with the Free The Army show, Holly became a globally conscious feminist, linking international feminism and anti-war activism. She was an active participant and coalition builder in what she refers to as the “heady days” of 1970s activism, when so many movements were gestating and jostling one another.

Another significant arena of Holly’s activism is the LGBTQ community. Her interest was both personal and political. She was one of the first celebrities to discuss her sexual orientation during a pioneering 1976 interview with People magazine. A staunch advocate for LGBTQ rights, Holly is comfortable with her own sexuality and has a clear understanding of the fluidity of sexual orientation.

Holly is also a teacher, presenting master classes in performance craft and songwriting to diverse audiences. Building on this role, her historic papers are housed at Radcliffe’s Schlesinger Library and are regarded as an informed look at the last 50 years of social change movements.

Holly finds herself in a role that her amazing journey has uniquely prepared her to fill as the significance of her work over time has crystallized her iconic status. At once flattered, amazed, and centered, she graciously assumes the honoring that comes with time, proud to represent—through her voice and her music—the movements that are so fundamental to her spirit.

Discover more about Holly at ​Holly Near – Music and Activism (hollynear.com) 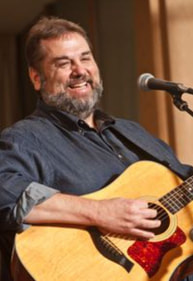 Veteran performer, teacher, radio host, song writer...the list goes on, but what Matt Watroba prefers to be known as is a community singer, song leader and educator.
​
Matt was born in Detroit and raised in Plymouth, MI.  He holds a Bachelor of Science degree from Eastern Michigan University, majoring in English, Language & Literature with a minor in Theatre Arts and Communication.  Throughout his high school and college career, Matt performed in a variety of plays and productions inspiring his love and enthusiasm for communicating to an audience from the stage.  However, Matt’s main passion gravitated toward music and education.

As a teacher, Matt worked for twelve years in the Plymouth Canton school system.  His classes in the areas of English, Journalism, and Speech always focused on innovative ways of cross-curricular learning. This experience translated directly to the hundreds of school assemblies and workshops he's performed with Robert Jones and the Music That Matters programs. He is also a regular instructor at the Swannanoa Gathering near Asheville, NC teaching classes on performance and community singing. His dynamic stage presence and strategy-packed presentations are evidence of someone who understands how to connect with audiences to create a thoroughly worthwhile learning experience.

Matt is a founding member of the National Folk Alliance and a charter member of the Board of Directors for Ann Arbor’s The Ark, both non-profit organizations formed to promote and preserve folk music. Matt is a published writer, having penned dozens of articles and reviews for Sing Out!, the national magazine of American folk and roots music founded by Pete Seeger in 1950.

His love of folk music led him to his position as the host and creator of the popular Folks Like Us program, a position he held for over 20 years on WDET-FM In Detroit. He also produced and hosted the syndicated, Sing Out! Radio Magazine heard on the XM Satellite network as well as the internet service Folk Alley. He is currently the host of Folk With Matt Watroba on WKAR Michigan State Public Media. Matt, along with his life-long musical partner Robert Jones, Co-founded the Detroit Non-Profit, Common Chords. Also in 2019, Matt Was inducted into the Folk DJ Hall of Fame at the Folk Alliance International conference in Montreal.

Matt sings and writes songs of compassion, inner strength, humor, and every day living. He was awarded "Best Overall Folk Performer" by the Detroit Music Awards for the year 2000, and his long list of credits include the prestigious Ann Arbor Folk Festival, the Detroit 300 Celebration, The Ark, Louisville’s Kentucky Music Weekend, The Fox Valley Festival, Chicago IL, The Old Songs Festival, Guilderland, NY, Owen Sound Folk Festival, Ontario, Canada and hundreds of school and community presentations throughout the Great Lakes region. He has shared the stage with some of our greatest performers, including Pete Seeger, Tom Paxton, Ramblin’ Jack Elliott, Arlo Guthrie, Christine Lavin, Peter Yarrow, and Richard Thompson. He sings songs that you will feel and remember for a long time. You will love his music, you will love the journey that his music takes you on, and you will love the place that his music takes you to.

Matt brings a unique set of talents to the stage as an educator, performer, and master of ceremonies.  His passion for bringing community together through music and education is infectious. Add to that Matt's own special brand of humor and you are in for a most entertaining and enlightening experience. 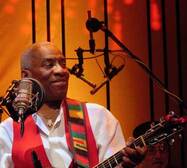 Reggie Harris is a singer-songwriter, storyteller, and cultural ambassador on a mission to educate, entertain, and inspire. For over 40 years, he has captivated audiences to standing ovations in the US, Canada, and across Europe.

A songwriter of great depth and insight, Reggie writes from a personal but accessible place that reveals his deep sense of humanity and a uniquely positive worldview. He is a trailblazer who performs for audiences of all ages. His effervescently humorous and hopeful presence has led fans to label him the “Ambassador of Joy, Hope, and Freedom.”

An educator who entertains, Reggie’s songs reveal the subtle truths of issues that touch our lives regardless of color, background, age, or nationality. It’s about the laughter and the tears… the challenges and the joy… the global and the personal. It’s about history and the present day… the sacred and the laugh out loud funny moments that define us.

Reggie received a life-saving liver transplant in 2008. He uses the inspiration and triumph of that gift of life to spread light and hope.

Averaging over 250 dates per year, this versatile performer is in high demand at arts centers, schools, universities, and festivals. Reggie is an intuitive presenter in workshops on history, song writing, and performance.

Reggie is a teaching artist for the John F Kennedy Center’s CETA program, a Woodrow Wilson Scholar, and the Director of Music Education for the UU Living Legacy Project. He is a master song leader who deeply values the power of song and the dignity of every human being.

Learn more about Reggie and his music at ​Reggie Harris | Songwriter, Storyteller and Lecturer (reggieharrismusic.com)
DONATE
All programs are free. Donations will be accepted to support the phenomenal guest speakers/musicians participating in the series and the ongoing work of the Living Legacy Project.